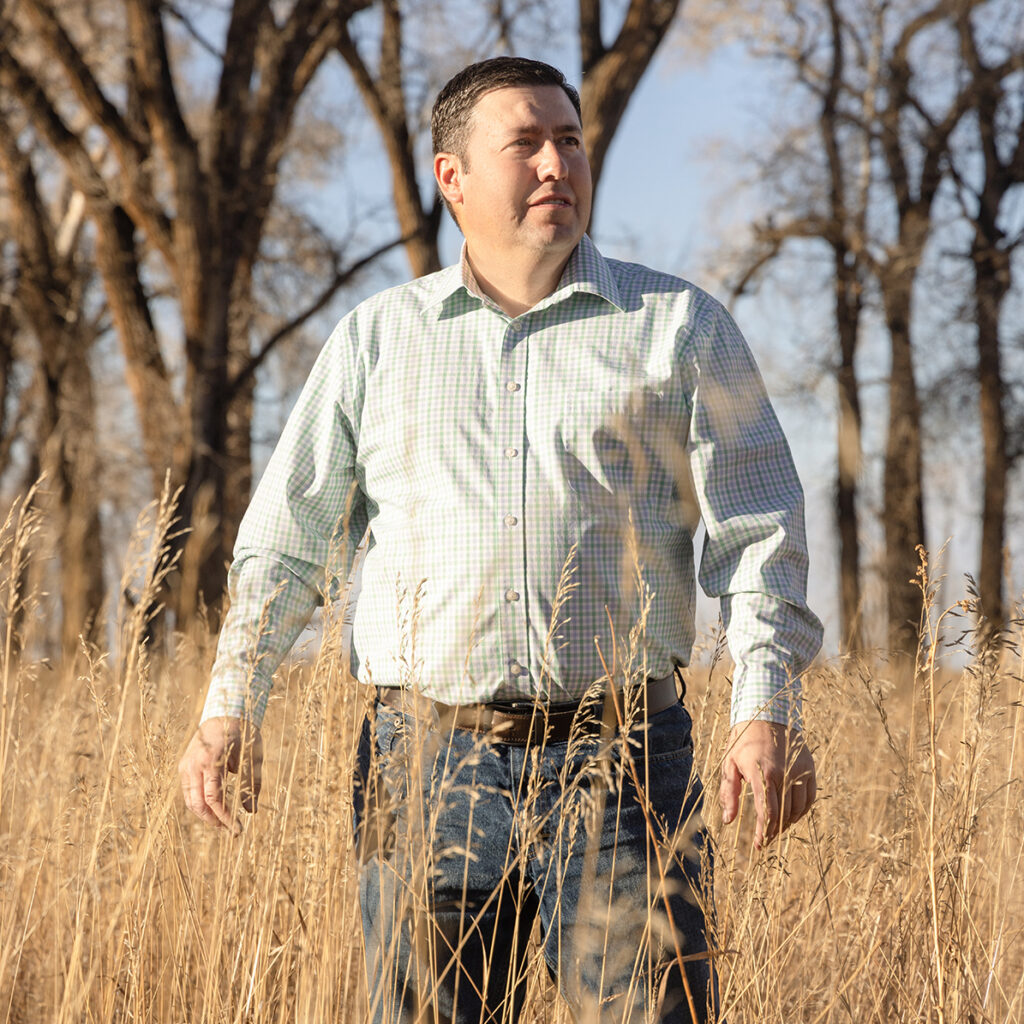 STUDYING HIS ASTONISHING FAMILY TREE, Armando Valdez counted back through 16 generations of forebears who have lived in the New World. His ancestral chart is like a visualization of the Spanish Empire – a graphic tracing the paths of explorers, conquerors, and settlers who started life in Spain in the late 1500s and, through the centuries, inhabited present-day Mexico, New Mexico, and, finally, the San Luis Valley in southern Colorado.

Here, on land ringed by the San Juan Mountains in the west and the Sangre de Cristo Mountains in the east, Valdez continues a farming and ranching tradition that dates back hundreds of years.

Valdez is co-owner with his sister and their spouses of Valdez Land & Livestock. He follows in the footsteps of family members before him, raising cattle, sheep, alfalfa hay, barley, and oats on 2,000 acres around Capulin, a tiny town at the foot of the San Luis Valley. The Alamosa River, Hot Creek, and La Jara Creek course through the land; supplemented by aquifers, these waterways give quintessentially high-desert terrain its richness and support the people, livestock, and wildlife living here. It is a setting and a lifestyle Valdez aims to preserve for his own children.

And, in a new role with the U.S. Department of Agriculture, Valdez hopes to support other Colorado agricultural families and communities that significantly contribute to the state’s food system, economy, history, and culture.

In November, he became Colorado director of USDA Rural Development, a federal agency that offers loans and grants to help create local jobs and to support economic development and essential services in rural communities. The agency, with seven offices in Colorado, works to improve the economy and quality of life in rural America and operates in spheres including water, telecommunications, energy, housing, and business.

Valdez is uniquely qualified for the job, with experience in farming and ranching, higher education, and wide-ranging community organizations in southern Colorado. He is vice chair of the Board of Governors of the Colorado State University System and has been a professor of business and health care administration at Adams State University in Alamosa.

More than anything, though, Valdez is a vocal advocate for Colorado’s agricultural communities and rural prosperity. “I have a passion for making rural communities better,” he said, while dining last fall at a Mexican restaurant in Alamosa, where a steady stream of friends stopped to shake hands and say “hello.”

His advocacy starts with an understanding of agriculture as foundational to the nation’s economy and the backbone of its rural communities. As he described these linkages, Valdez drove a flatbed pickup through his family ranch, pointing to cottonwood trees with golden leaves as evidence of the river and a network of nearby creeks. He stopped on rangeland where a group of Angus cattle grazed – a handful of the 400 head the Valdez family runs. The herd often grazes on public lands in the region, and the family moves cattle from grazing land to their homeplace by horseback, a trek that might entail two days of riding.

“There’s a work ethic that’s been embedded in us since a young age,” Valdez said, before checking the water level in a stock tank for the cattle. “We have the idea that if the sun is out, we better be working.”

Many Americans do not know or fully appreciate the tireless effort that goes into producing their food, Valdez said. It’s easy to take for granted when people have a safe and high-quality food supply readily available, he noted. Yet, a grocery-store aisle filled with multiple brands and types of bread or the meal that brings together a group of friends, for example, results from an intricate web of people working in food and agriculture, Valdez said.

Those in the industry are motivated by pride in the food they produce and by the rural lifestyle many have inherited. “It’s not solely an economic endeavor,” he said. “It’s an enriching lifestyle that involves culture, family, and a connection to nature. It’s enriching for the soul, I think. That part is missed. People don’t realize what goes into producing their food, and we do it in part for that rural lifestyle.”

Public investment in rural communities is therefore a key way to maintain a reliable food supply and to reinforce a pillar of society, Valdez said.

He stopped his truck in Capulin to provide an example. Here, his former middle school stood boarded up, but soon it will be the centerpiece of a new community center resulting from a property donation and development grants. Valdez, who has shepherded the deal, envisions a playground, community meetings, and local festivals – a return to vibrancy.