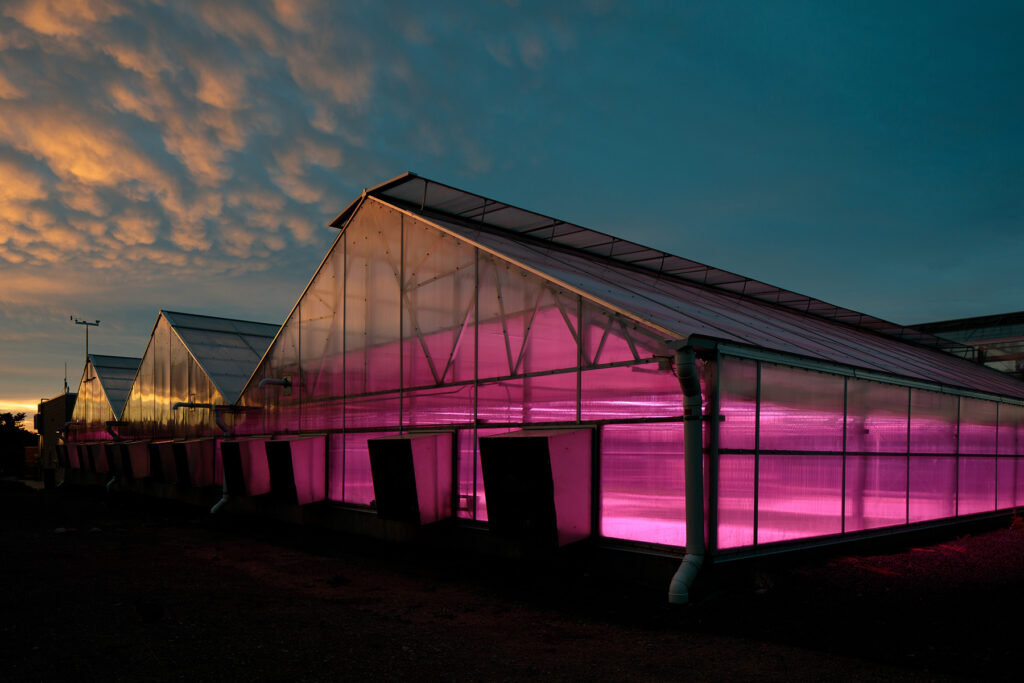 The Terra building will showcase possibilities with urban farming.

WHEN MANY OF US VIEW A DOWNTOWN CITYSCAPE, we see a concrete jungle punctuated by high-rises. Not Jennifer Bousselot. She sees acres and acres of farm ground. To be exact, 5,000 acres of space for growing fresh fruits and vegetables in Denver alone. It’s all up on the rooftops.

Bousselot, an assistant professor of horticulture at Colorado State University, is a leading Front Range proponent of green roofs for gardening and urban energy conservation. But in the course of studying the pros and cons of verdant rooftops, she has become something else: a proponent of green roofs featuring food crops, cultivated in combination with rooftop solar arrays.

Together, the rooftop systems have a 1+1 = 3 kind of synergy that Bousselot sees as a possible solution for both urban food deserts and clean energy production, a way to deliver fresh produce and sustainably generated electricity right where the resources are most needed – in urban population centers, where most people live.

“The key is the synergy between the two systems. It’s the co-location that’s important,” Bousselot said, while surveying a research plot last summer. “Rooftop farms are on the rise worldwide, so we’re working with the idea of getting as many benefits as possible from one space by vertically stacking multiple systems in one urban footprint.” 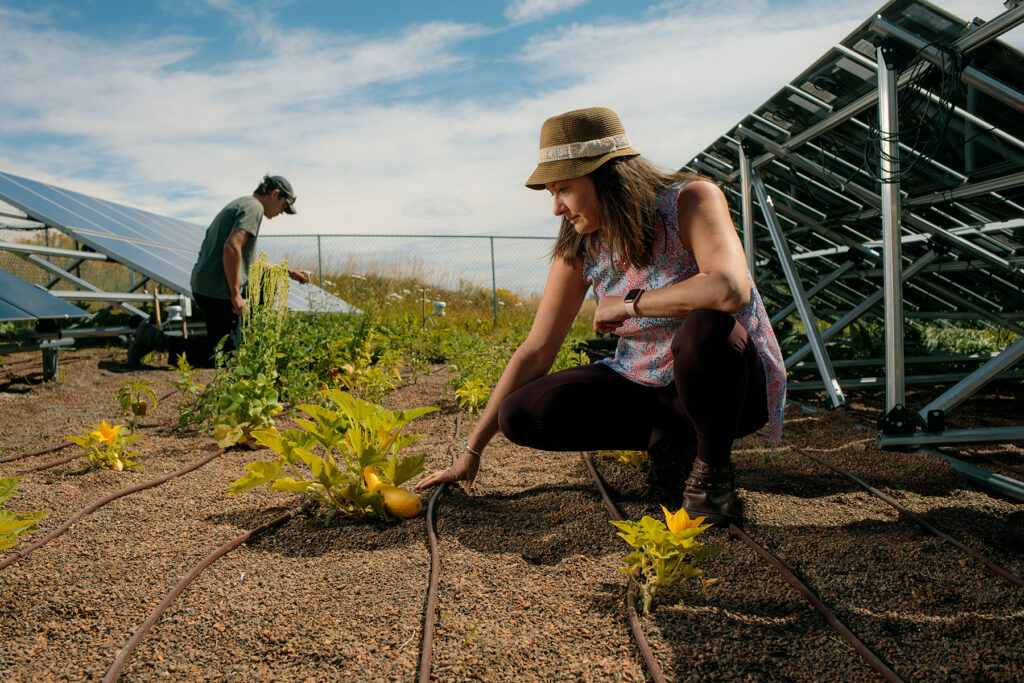 Jennifer Bousselot, an assistant professor of horticulture at CSU, checks vegetable crops with help from graduate student Thomas Hickey Jr. This plot, at CSU in Fort Collins, was planted at ground level but replicates the rooftop agrivoltaics system that Bousselot will install atop the Terra building at CSU Spur.

Her concept will be featured in one of several urban farming exhibits at the new CSU Spur campus at the National Western Center in north Denver. The campus begins its staggered opening in January. By next summer, urban farming displays will blossom inside the Terra building and on its rooftop.

The displays will invite visitors to consider city spaces as logical places to grow fruits and vegetables. Themes of food security and sustainability will run through the CSU Spur exhibits: Each will show how leading-edge agricultural technologies may be employed to make fresh, nutritious produce easily accessible in cities, where populations are dense, healthy food is sometimes in short supply, and ground for traditional farming is virtually nonexistent. These farming methods would likely save water and transportation costs and – if proven technically feasible and cost effective – might offer other conservation benefits to make intensive urban food production worthwhile.

“It really comes down to how we make urban agriculture efficient, economically feasible, and accessible,” said Joshua Craver, a CSU assistant professor of horticulture and an expert in cropping methods in greenhouses and other indoor facilities. “This is not meant to replace open-field agriculture. It’s here to be one tool in the toolbox of agriculture and could help provide fresh produce to communities that lack access. This is a way we might be able to help serve urban communities.”

Bousselot explained the basis of her research during a TEDxCherryCreek presentation: “Half of our world population lives in urban areas already. By mid-century, two-thirds of our population will be living in urban areas. All those people eat – and very little ground is available for growing food on the ground, or at grade. So, I really want to push for producing food in the only available space remaining – rooftops.” 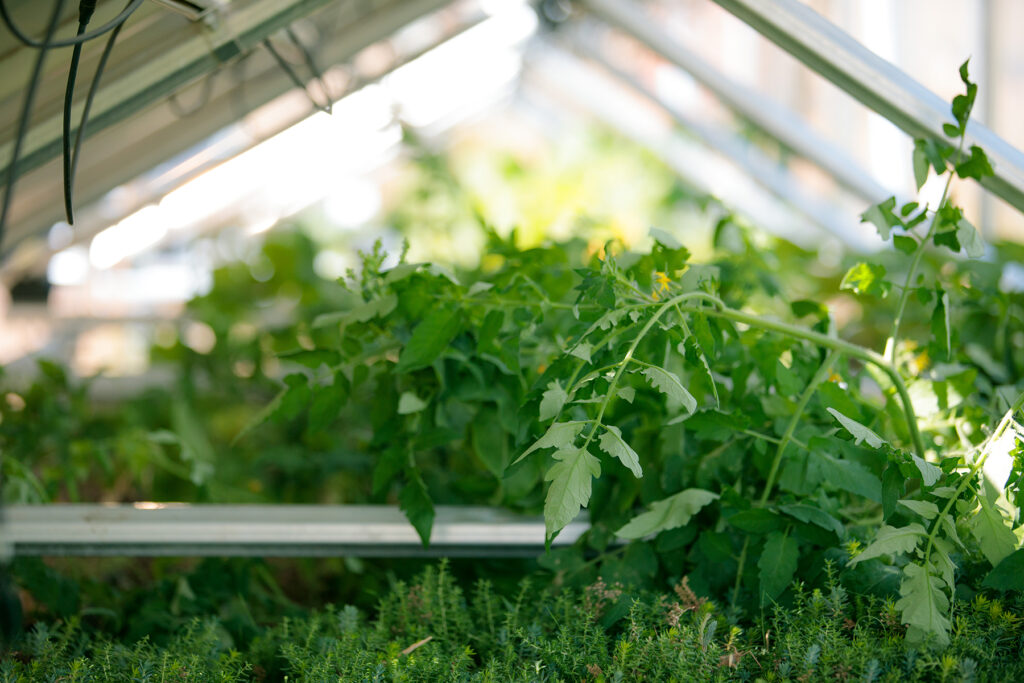 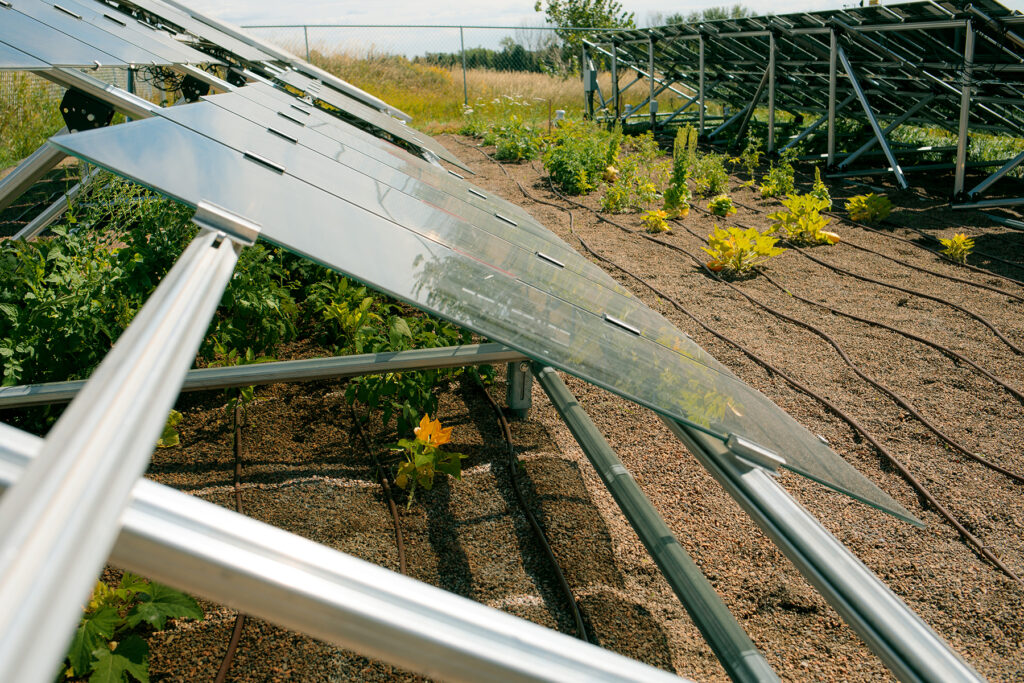 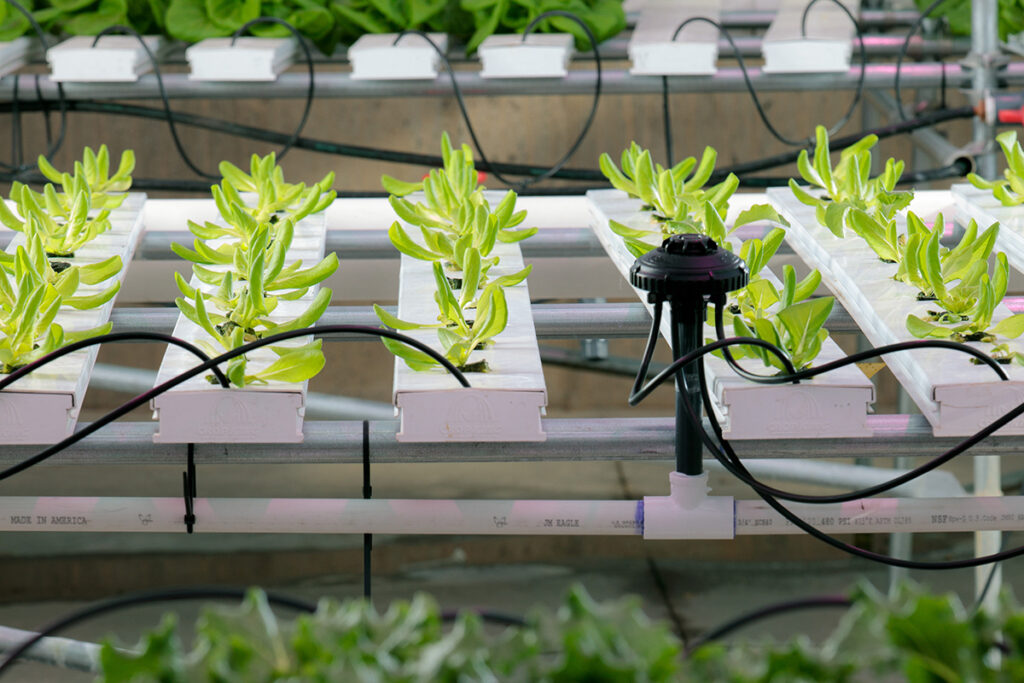 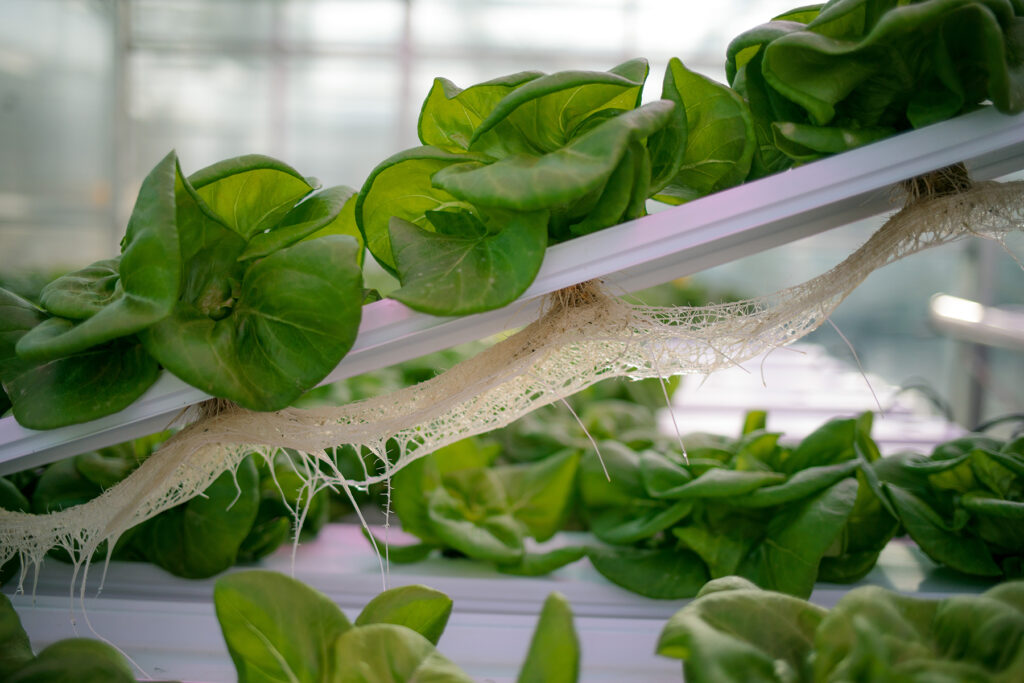 Photos at left: Rooftop agrivoltaics involves the cultivation of fruits and vegetables on the rooftops of urban buildings – in combination with rooftop solar arrays, which provide protection for plants while producing renewable energy. Photos at right: Hydroponic systems grow plants in nutrient-infused water – without an ounce of soil.

Top photos: Rooftop agrivoltaics involves the cultivation of fruits and vegetables on the rooftops of urban buildings – in combination with rooftop solar arrays, which provide protection for plants while producing renewable energy. Bottom photos: Hydroponic systems grow plants in nutrient-infused water – without an ounce of soil.

STUDIES HAVE SHOWN that performance of solar arrays notably increases when plants are grown under and around the panels, primarily because plants provide evaporative cooling during hot months. In turn, solar arrays – just like greenhouse coverings – offer protection from harsh weather, which notably increases plant growth.

Bousselot is examining how to put it all together on a rooftop. She calls the food-and-energy arrangement “rooftop agrivoltaics”: rooftop agriculture combined with “photovoltaics,” the main components of a solar panel.

Separately, the systems are nothing new. Solar arrays are installed on many rooftops, including those of CSU buildings. Likewise, green roofs are growing like weeds in many cities, where they have been shown in suitable circumstances to boost stormwater management, improve air quality, cut greenhouse gas emissions, and reduce city-generated heat, known as the “urban heat island.”

It’s the combination that makes rooftop agrivoltaics novel, doing double duty in unexpected spaces. Bousselot first observed the benefits while working on a green roof research project at the Environmental Protection Agency office in Denver in 2007. By serendipity, some of the plants in the project were stuck under a rooftop solar array – and Bousselot noticed how much hardier they were with protection from the panels. “That was the eureka moment,” she recalled. “It was so stunning how much those plants thrived.” Now, she is studying ways to perfect and scale up the concept, tailoring it for crops such as tomatoes, peppers, squash, and lettuce.

Bousselot was a technical adviser on Denver’s Green Buildings Ordinance, which calls for the incorporation of energy-conservation strategies, including green roofs, in large construction projects. In the course of analysis for the ordinance, Bousselot and other advisers found that the city and county of Denver is home to 5,000 acres of fairly flat rooftops, the kind needed for green roofs. Even modest crop production in those spaces could annually yield 5 million pounds of produce grown right where it’s needed, Bousselot said. “Imagine how many households that can feed!” she enthused during her TEDx presentation.

Rooftop agrivoltaics won’t edge out traditional farming. But it could supplement established methods of food production in targeted settings, where integration with solar panels makes sense, Bousselot said. “It’s not an either/or,” she noted. Bousselot envisions rooftop community gardens planted in combination with rooftop solar arrays, so that occupants of a big apartment building, for instance, would get both fresh produce and solar energy right where they live. 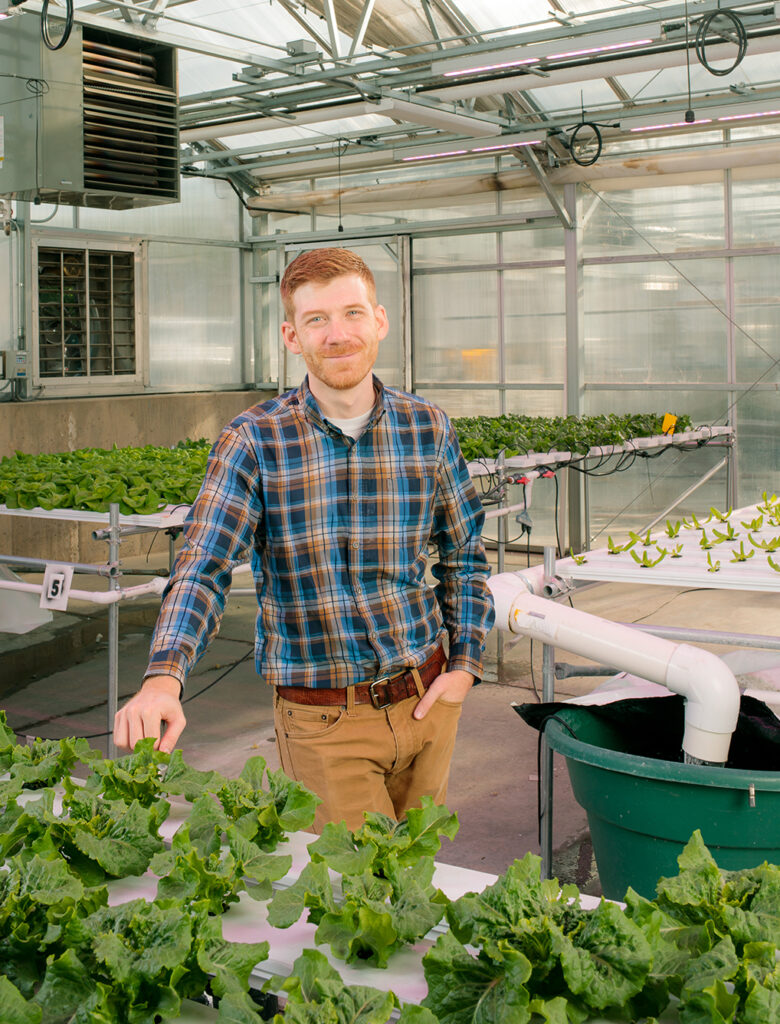 Joshua Craver, a CSU assistant professor of horticulture, will lead urban farming research and demonstrations in both greenhouses and vertical growth chambers at CSU Spur.

THE NOTION OF “LOCATION, LOCATION, LOCATION” might also describe Craver’s hydroponic systems inside high-tech greenhouses and growth chambers. His indoor farming likewise takes the country to the city: At CSU Spur, Craver will study and demonstrate vegetable production that may be accomplished in the face of limited resources, including land and water, to deliver nutritious food in the heart of densely populated cities.

Craver recently discussed his CSU Spur projects while standing inside a greenhouse on the CSU campus in Fort Collins. Outside, it was snowing. Inside, rows and rows of red oak leaf, butterhead, and summer crisp lettuce grew in systems relying largely on nutrient-infused, recirculating water. The greenhouse supplied some 100 pounds of leafy greens to CSU dining halls each week – unbounded by seasons, regardless of unfavorable weather, with few worries about pests, with minimal transportation and processing, even without an ounce of soil. With reduced risks of contamination with food-borne pathogens, these were also clean greens.

Craver and colleagues call production in high-tech greenhouses and other indoor facilities “controlled environment agriculture” because crop production in these settings allows for precisely manipulated inputs of water, light, nutrients, temperature, humidity, and carbon dioxide. Most of Craver’s teaching and research in Fort Collins uses hydroponic systems inside a greenhouse: Plants are grown in basins with about a foot of water or in trays with a half-inch of recirculating water; natural light is filtered through greenhouse panels and is supplemented with controlled LED lighting, often in purplish hues for plant growth and energy efficiency. Teaching and research space at CSU Spur will replicate these systems and also will include highly controlled growth chambers.

Such hydroponic systems already are found at indoor commercial farms that supply many grocers with fruits and vegetables, particularly outside the summer growing season. Buy a tomato at a grocery store in Colorado in January, and it assuredly came from a greenhouse or was trucked from a warmer clime.

With his research, Craver aims to optimize inputs in controlled environments so that revenue derived as a result of crop quality and yields – combined with transportation, water, and other savings – outweighs the high costs of building and powering high-tech indoor farms. “There are multiple ways to produce these crops,” Craver noted. “If we can make these systems more efficient, we can drive down costs and open up more opportunities.”

This is not meant to replace open-field agriculture. It's here to be one tool in the toolbox of agriculture and could help provide fresh produce to communities that lack access. This is a way we might be able to help serve urban communities.

At CSU Spur, Craver will grow a variety of leafy greens and herbs that likely will be used at a café on site or distributed to low-income families through local food pantries – illustrating the goal of growing food right where it is needed.

As is the case at CSU in Fort Collins, these veggies will get their start in rockwool substrate, a material created by spinning molten basaltic rock into fine fibers that are formed into cubes. Plants sprout in this material and grow atop nutrient-infused water, without a pinch of soil. By adjusting light color and intensity, among other inputs, Craver hopes to document changes in plant growth, flavor, and nutritional value – so that produce from controlled environment facilities matches or exceeds the yields, taste, and healthfulness of crops grown in the field.

Skeptics doubt that produce from indoor farms will ever rival the qualities of fruits and vegetables grown in soil and sunlight. But, to proponents, what this produce lacks in terroir – the unique characteristics imparted by natural environments – it might make up in accessibility for urban dwellers.

“We want to provide people with exposure to what urban agriculture can look like,” Craver said. “It’s a matter of where this food fits into the broader picture of agriculture and how we can use it to meet challenges facing our industry and communities.”

Photo at top: Greenhouses at the CSU Horticulture Center in Fort Collins use different colors and intensities of LED light to enhance plant growth and energy efficiency. Similar technology will be used in greenhouses atop the Terra building on the CSU Spur campus.

READ MORE FROM THE WINTER 2022 ISSUE OF STATE 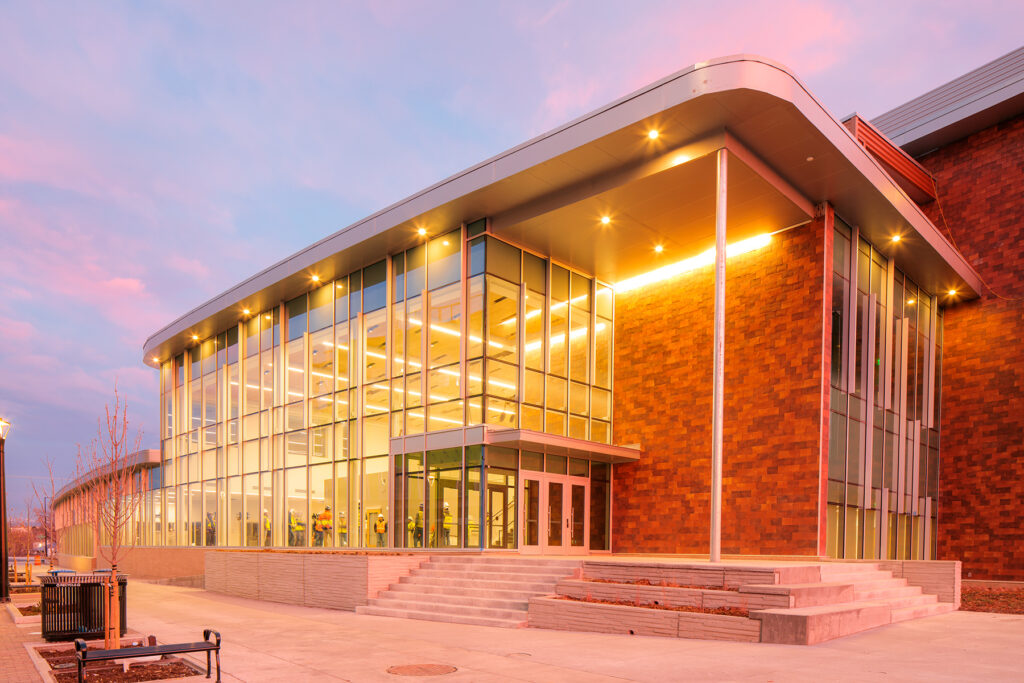 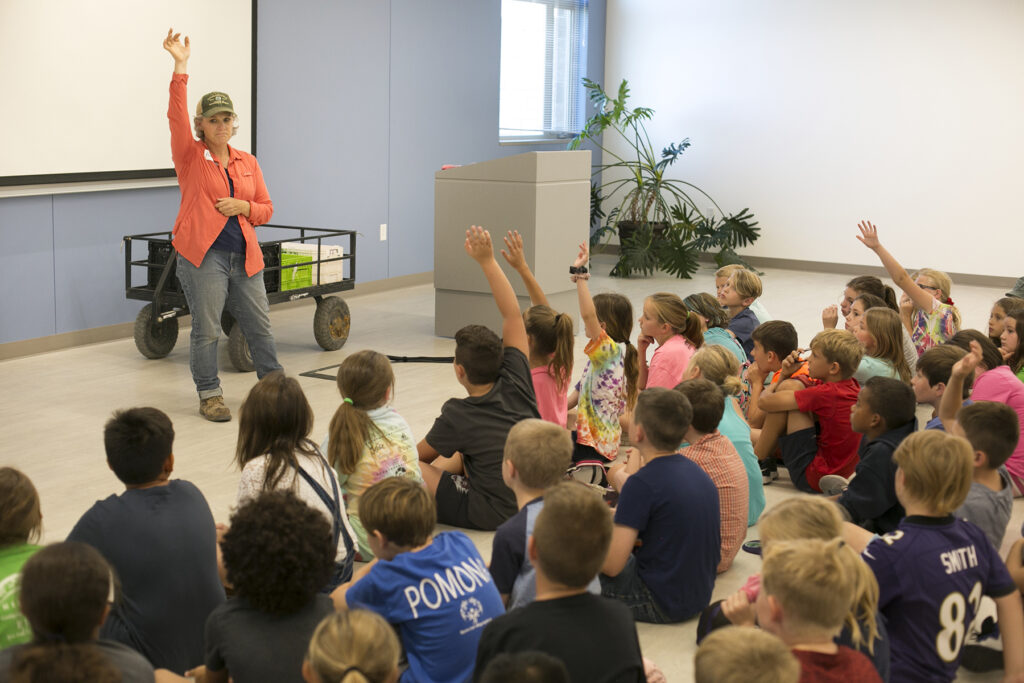 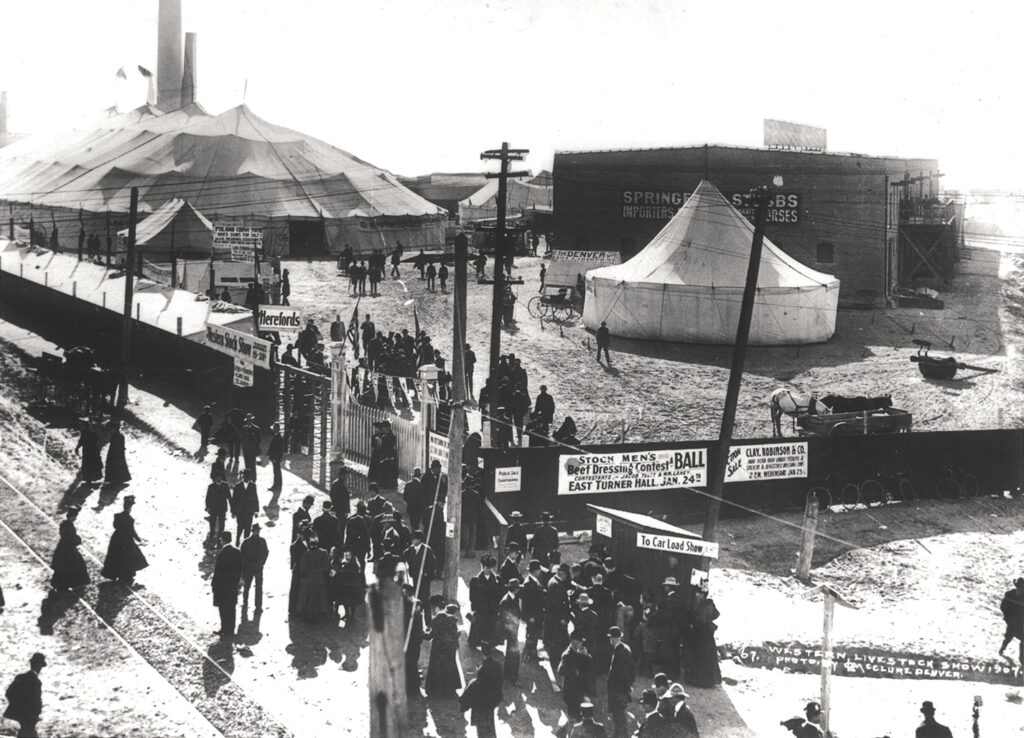 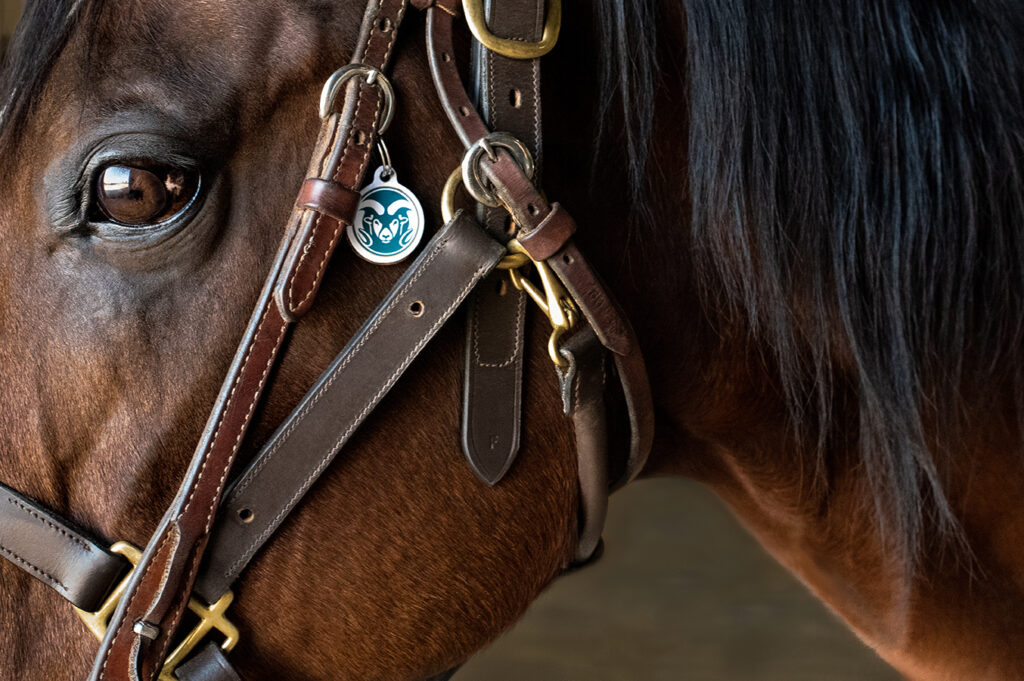 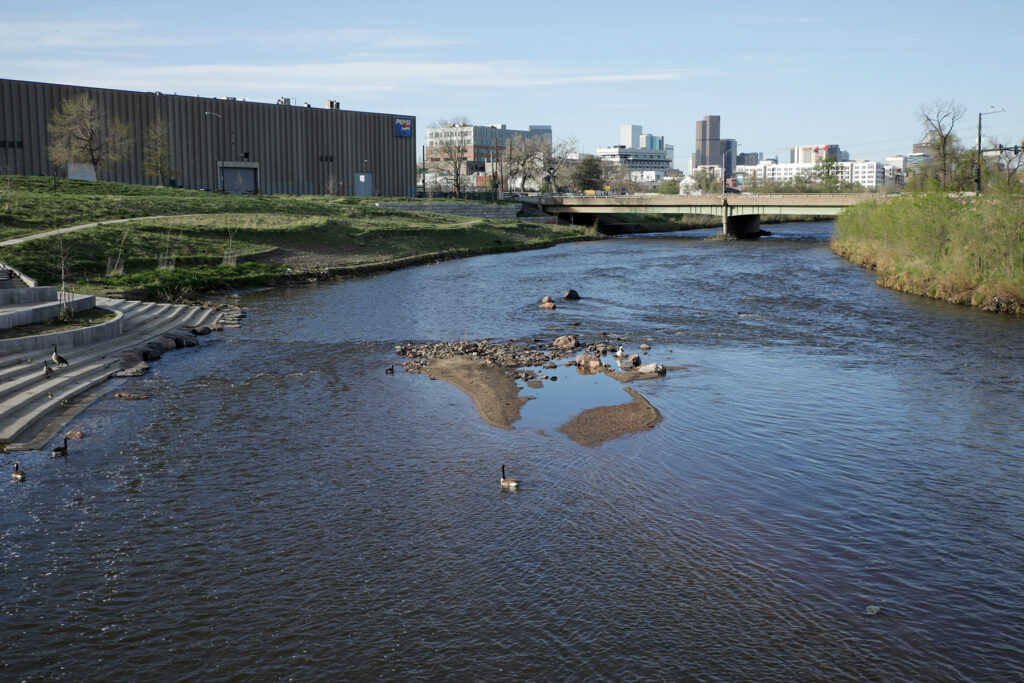 What a river reveals 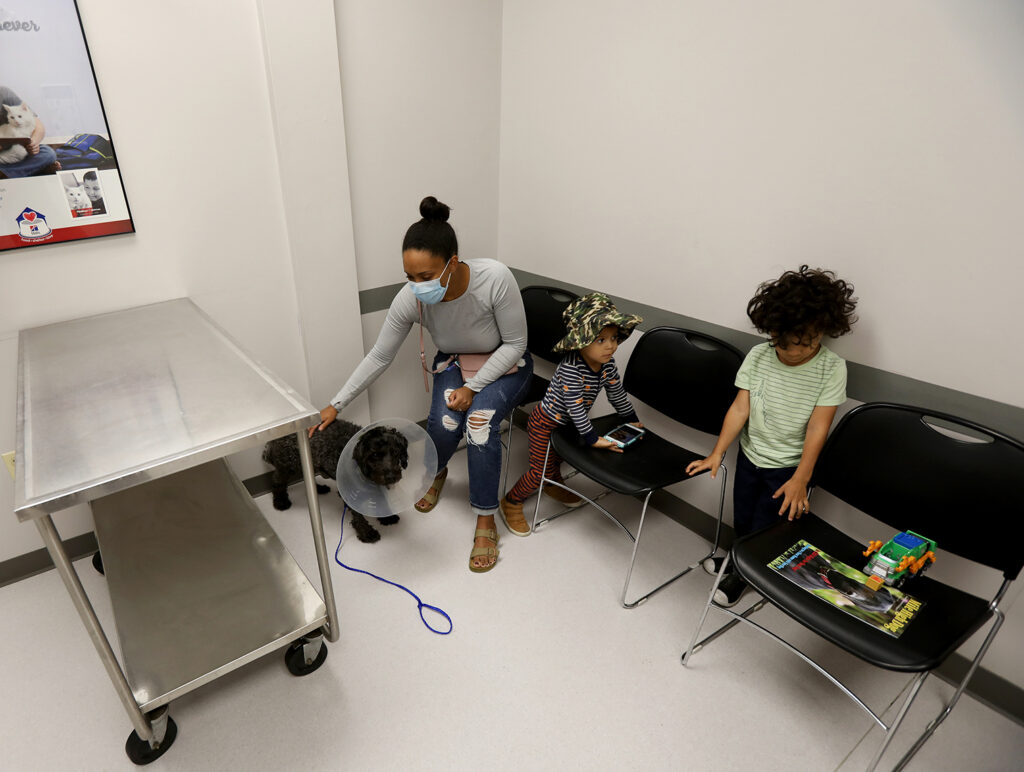 A window on veterinary medicine 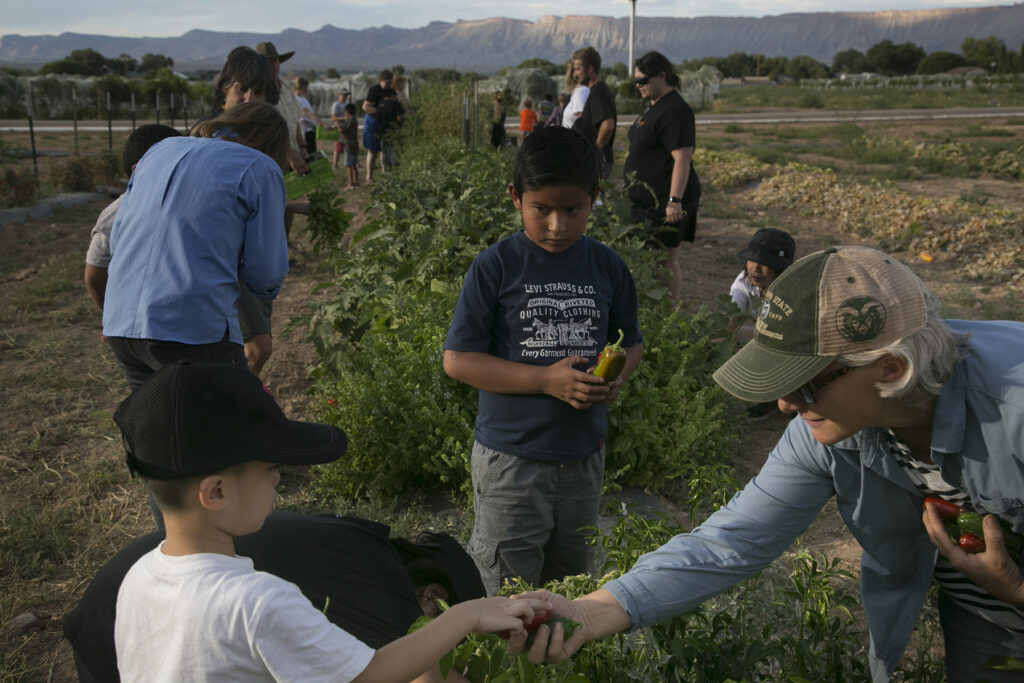