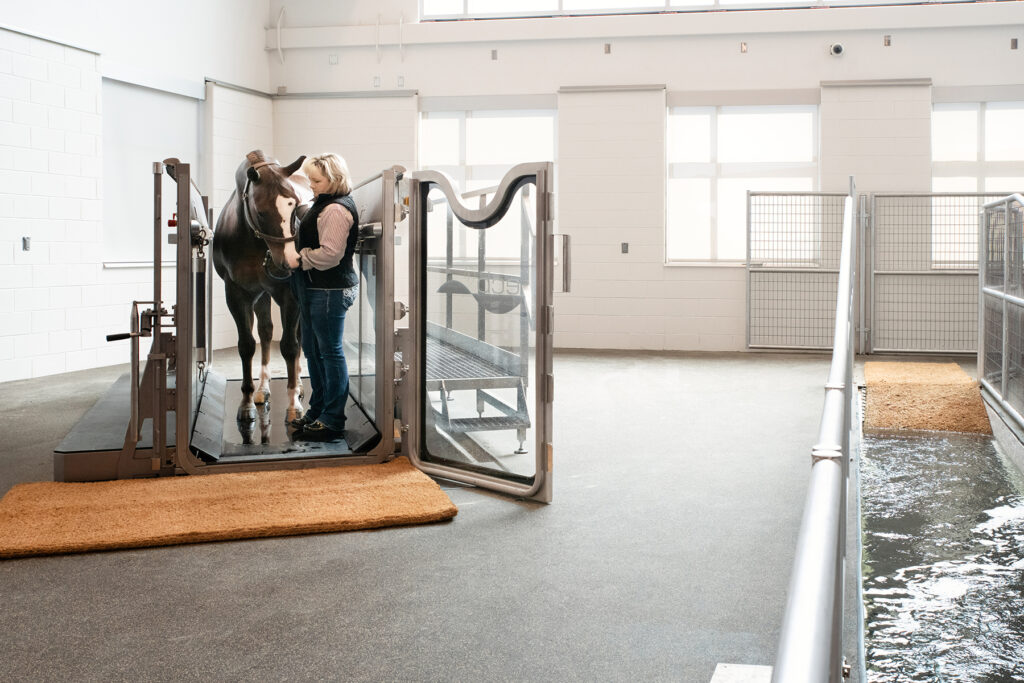 Equine athletes make a splash at new veterinary clinic in the Vida building.

KM SMOOTH MOVES, BETTER KNOWN AS “ODIE,” has been one of owner Terri Kenney’s best friends for years. She calls him “a fabulous creature,” “a good soul,” and “so much fun to ride and show.” So, when Kenney noticed Odie’s movies weren’t quite as smooth – he started to limp during a ride – Kenney was immediately concerned about her Quarter Horse gelding.

“I stayed on him and walked around for a little bit. I wasn’t sure if maybe he had a cramp or got hurt in his stall or something,” Kenney recalled of her dark chestnut horse.

Odie’s limp did not improve during their ride that day, in 2019. The next morning, the horse still seemed lame. Kenney, who lives in Metro Denver, was quick to seek veterinary care for her horse. “I adore and love him,” she said of Odie, now 13 years old. “We will get old and gray together.”

Dr. Melissa King, director of the new equine clinic at CSU Spur, leads Odie into a tank-style underwater treadmill in the Vida building.

Beyond his role as a companion, Odie is an elite athlete: He lives with other champions at a barn in Greeley and competes in as many as two dozen top-tier horse shows each year – in Western trail, Western riding, horsemanship, and Western pleasure competition. Odie often travels to American Quarter Horse Association shows in Texas, Arizona, Oklahoma, Ohio, and elsewhere; he has placed in the Top 10 nationwide in some of his disciplines. So, in addition to causing pain and worry, an injury could have serious repercussions for competition, much as it would for a human athlete.

To Kenney’s dismay, an ultrasound exam and magnetic resonance imaging showed her horse had a significant tear in the deep digital flexor tendon in his left front leg. The spring-like tendon is similar to an Achilles tendon in a person. It runs from deep inside the hoof, behind the ankle, and up to the back of the knee, helping to connect critical machinery in a horse’s complex hoof and lower leg.

“It was very difficult. There were a lot of tears. I was very worried,” Kenney remembered of the diagnostic findings. “The vets at CSU said, ‘This is serious. However, it is not necessarily a career-ending injury if we take care of it.’”

Sports medicine is a branch of veterinary medicine that deals with physical fitness, treatment, and prevention of injuries related to sports and exercise."

For eight months, Odie stayed at the CSU equine rehabilitation center in Fort Collins and received a variety of rehabilitative therapies. In addition to stretching and core strengthening, Odie exercised on an underwater treadmill to increase joint range of motion and improve stride length and muscle strength, while decreasing load on the injured tendon. He underwent cryotherapy to reduce inflammation and pain. Laser therapy and stem cell injections additionally helped decrease inflammation and aid healing. Each day, Odie was walked while wearing a hind-end TheraBand to improve strength, stability, and flexion. He also received transcutaneous electrical nerve stimulation, bioelectromagnetic pulse blanket therapy, massage, and acupuncture to alleviate pain and encourage healing. Additionally, Odie wore a tailored horseshoe with a wedge pad to put his tender hoof at a slight angle, lessening pressure on the back of his injured lower leg.

After returning to his home barn, Odie continued rehab as he slowly returned to being ridden. The process took more than a year, but Odie is back to top-tier competition. “He’s 100 percent – never a bad step,” said Kenney, who never determined what caused the injury. “The treatment plan worked so well for him, and I’m so grateful to everyone who cared for him.” 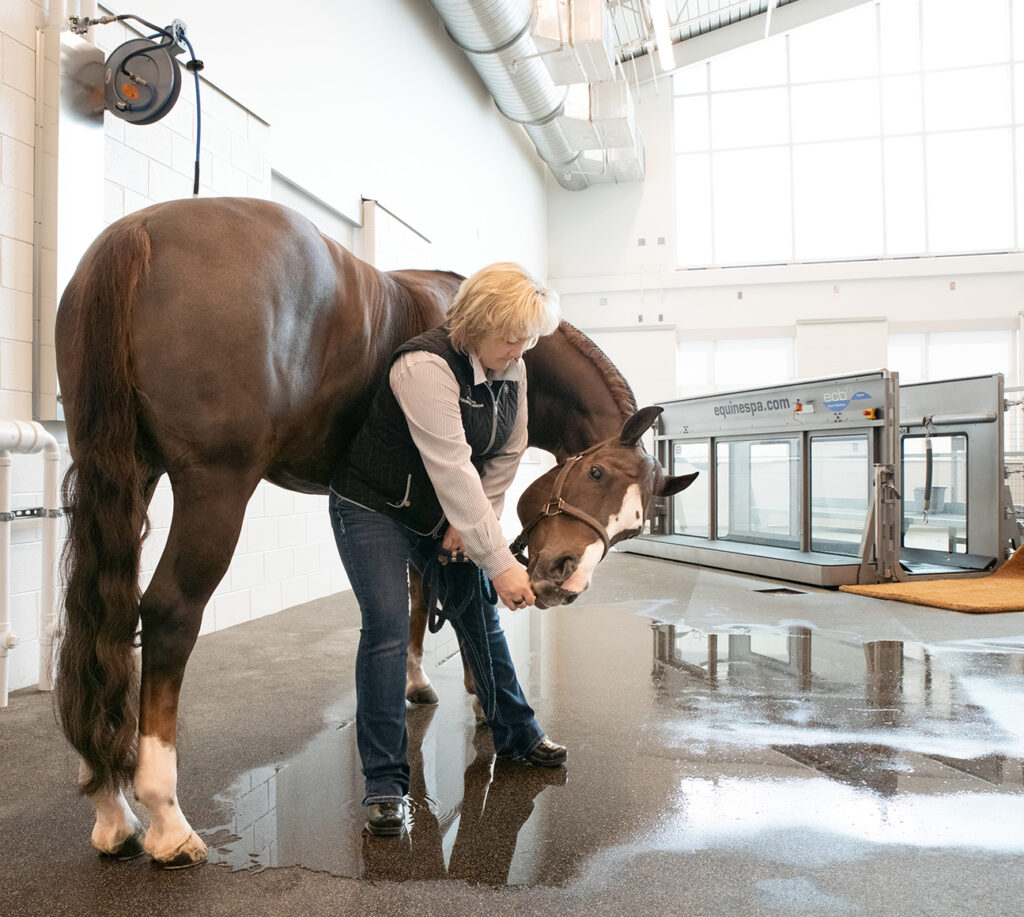 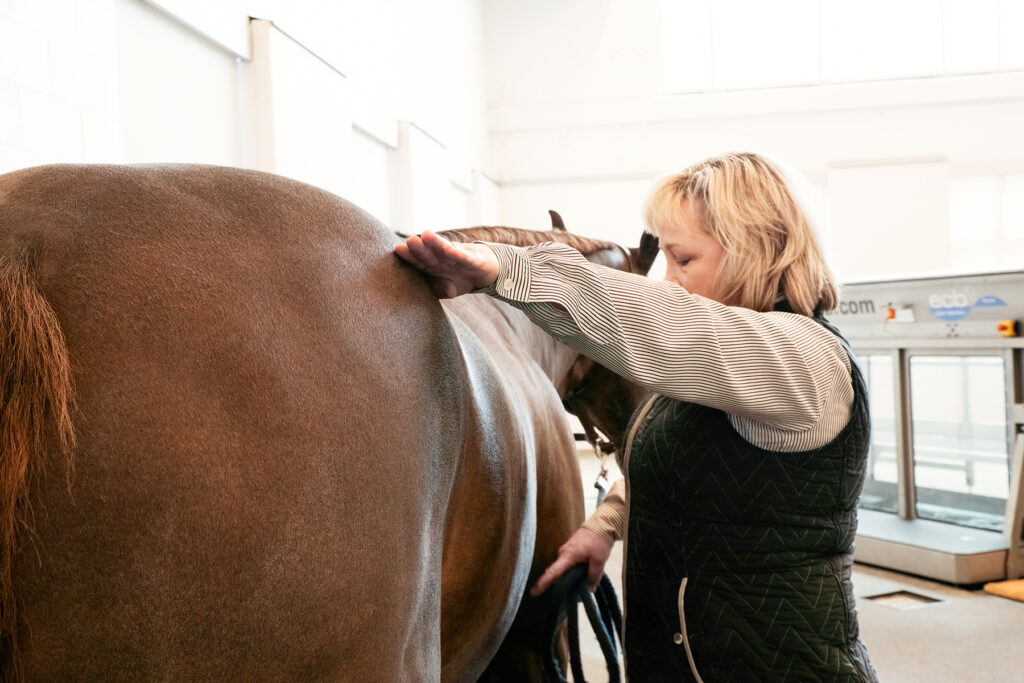 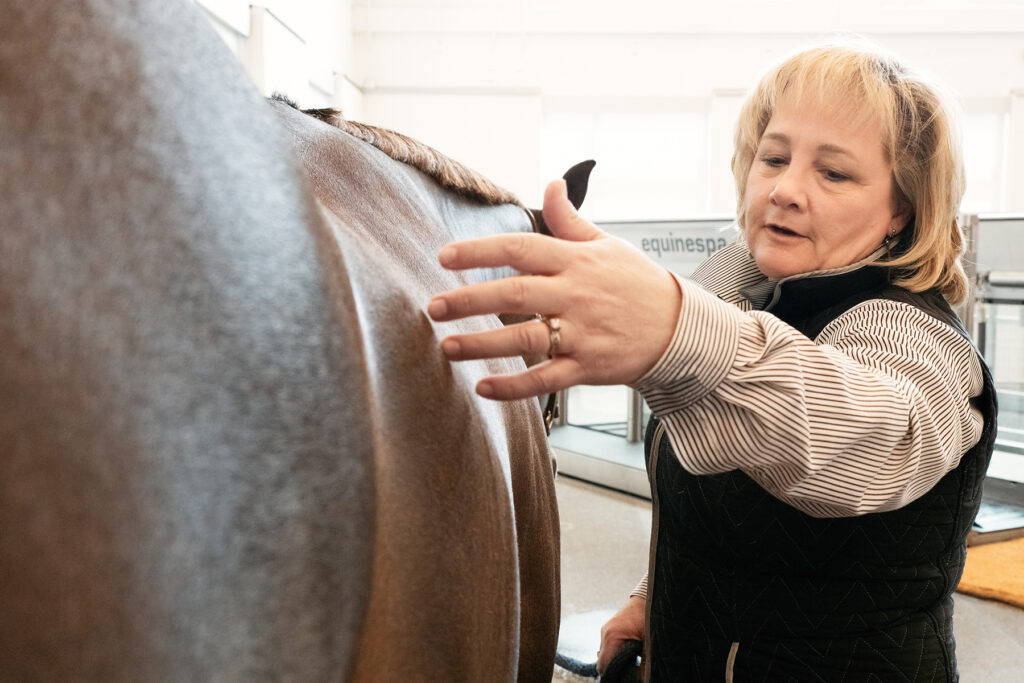 Top: Dr. King uses a carrot as a treat to entice Odie into a stretch. Middle and bottom: Dr. King describes anatomical connections involved in a horse’s athletic abilities.

SOON, SUCH CARE WILL BE DELIVERED at the Equine Sports Medicine and Rehabilitation Clinic in the Vida building at CSU Spur. The clinic opened with the building in January but is not yet seeing patients. Eventually, the veterinary staff will provide rehabilitative care for horses competing at the forthcoming Equestrian Center, which will be constructed north of the Vida building at the National Western Center. Clinic staff additionally hope to see rehabilitation patients referred by outside veterinarians.

For now, though, the Equine Sports Medicine and Rehabilitation Clinic is caring for horses that care for humans – those that help provide therapy for people with disabilities and other challenges at the Temple Grandin Equine Center, whose Denver branch also is housed in the Vida building at CSU Spur. The therapy horses are healthy but still benefit from modalities that ease the stresses and strains of frequent physical work. The horses also help demonstrate use of clinic equipment for visitors.

“There’s a huge educational opportunity here,” said Dr. Melissa King, an associate professor of equine sports medicine at CSU and director of the new clinic at CSU Spur. “The vision for this building is to open the eyes of the younger generation so they can see what’s available in animal-care careers.” To boost curiosity and inspiration, large viewing windows sit above the equine facility, allowing visitors to watch sessions with horses from the Temple Grandin Equine Center. Often, King is on hand with a microphone to explain therapies that prevent injuries or help horses heal afterward.

“The comeback is motivating. It’s rewarding to see a horse hurt or injured that can return to full performance,” said King, who treated Odie after his injury. “Our primary goal is to help horses and owners to be successful. It fills your heart to see that.” 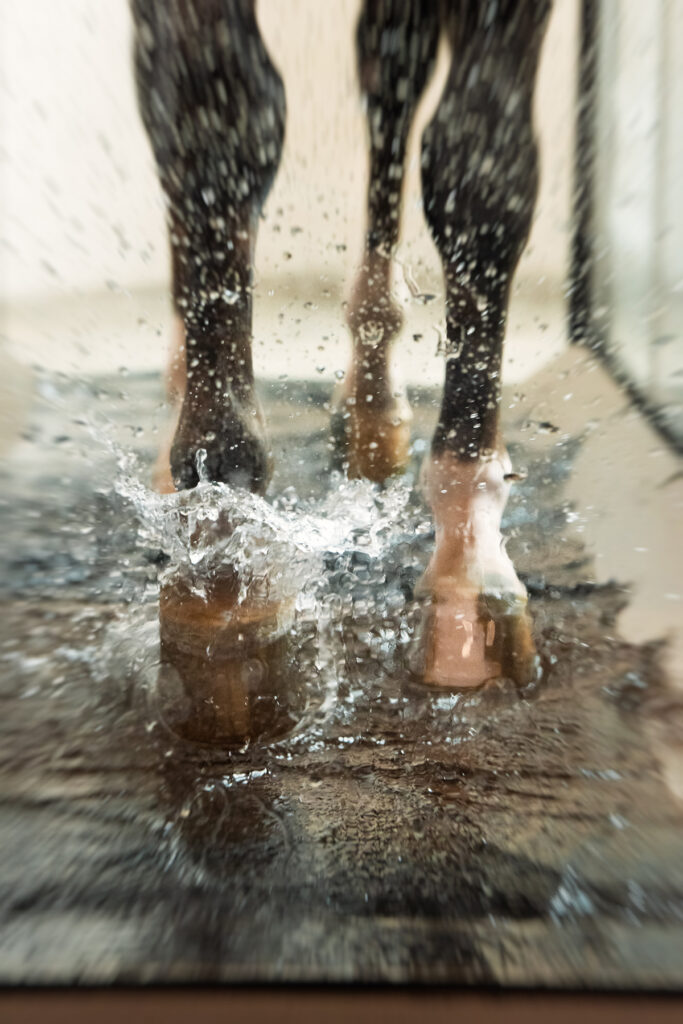 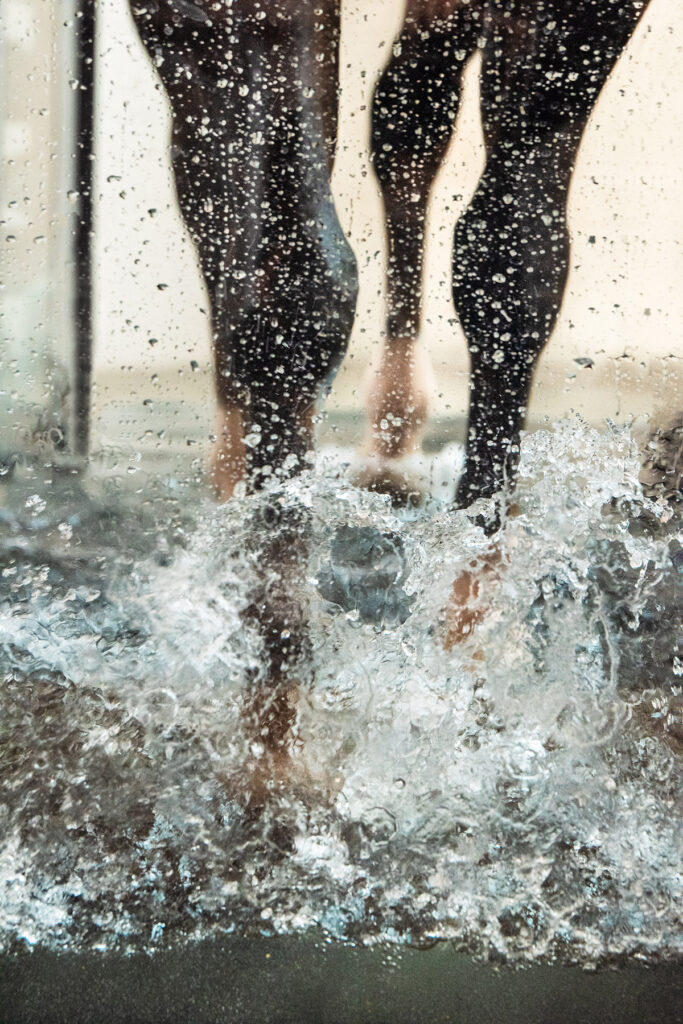 Odie exercises on a tank-style underwater treadmill to demonstrate part of his healing regimen.

Equine sports medicine patients are performance athletes in disciplines as varied as jumping, dressage, eventing, racing, cutting, and reining. Just like human competitors, these horses have athletic lives that entail speed, strength, sure footing, quick turns, and frequent joint impacts. And, as King noted, equine athletes also carry people while doing their work, adding extra weight and stress. So, it’s not surprising that horses and humans need similar care to prevent, treat, and recover from injury. In fact, medical advancements for one species often translate to the other, especially when it comes to the remarkably similar musculoskeletal systems in people and horses; thus, the study of “translational medicine,” in which research findings for one species may apply to the other.

King put the similarities in joint structure into medical terms: “Human and horse joints are very similar, as they are supported with subchondral bone and articular fluid, bathed in synovial fluid, and contained within a fibrous joint capsule,”she explained. “And the cartilage thickness of the human knee is similar to the cartilage thickness of an equine stifle, which also has a patella and patellar ligaments, just like a human knee.”

The veterinarian often reads scientific studies conducted in people that might be applicable to horses. “There’s also research done in horses that can be translated to people, so it goes both ways,” King said. For instance, some techniques used in human orthopedic surgery originated in equine medicine; an example is subchondral bone micropicking, a technique that promotes cartilage repair and regeneration after surgery. At CSU, equine veterinarians are examining a rehabilitation technique called blood flow restriction therapy; the equine studies are expected to help medical doctors understand how the therapy influences bone, muscle, tendon, and tissue in human patients.

Rehabilitation is the process of returning the injured equine athlete back to their full level of performance. A rehabilitation program is based on therapeutic exercises designed to target and maximize healing."

At the Equine Sports Medicine and Rehabilitation Clinic, therapeutic modalities are much like those used for people. “Any of these treatments could be used for various injuries, and usually several will be used in combination, as some are used for pain modulation while others are used for tissue healing,” King explained while touring the clinic in the Vida building. “The primary purpose for the modalities is to serve as an adjunct to any individual’s rehabilitation program. The general purposes are to modulate pain, decrease inflammation, stimulate or alter the healing process, and target muscle function.”

A favorite among visitors who observe – and horses using it – is an underwater treadmill set into the ground, like a swimming pool. Akin to water aerobics for people, horses walk mostly immersed on the treadmill and build strength and stamina through water resistance; yet the buoyancy of water reduces impact on joints. Lannie, a therapy horse at the Temple Grandin Equine Center, often demonstrates use of the in-ground underwater treadmill and blows bubbles in the water. 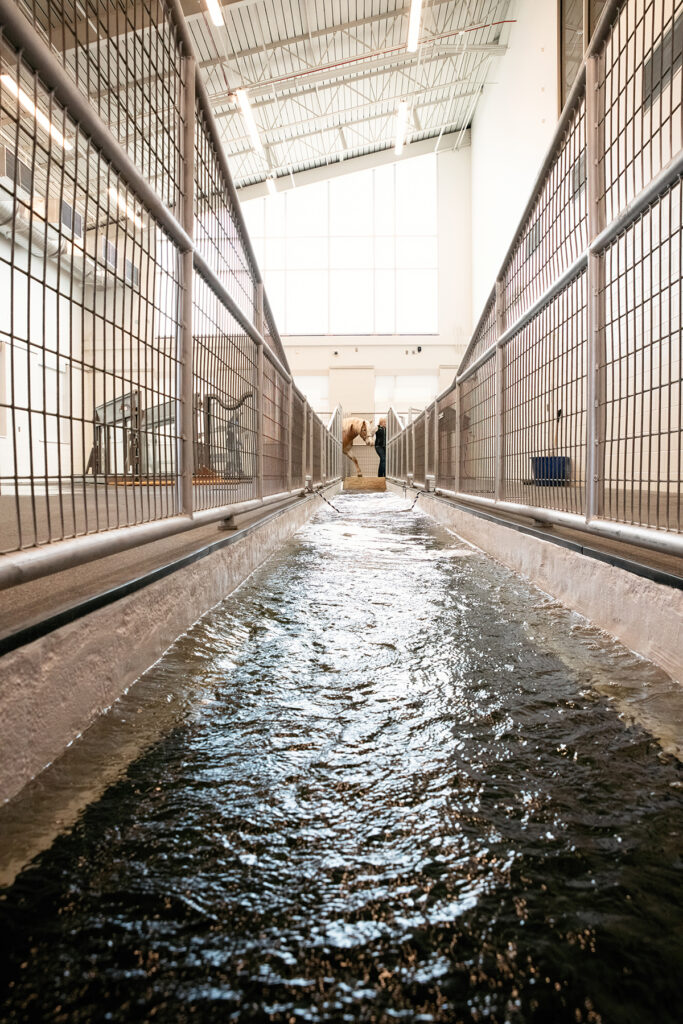 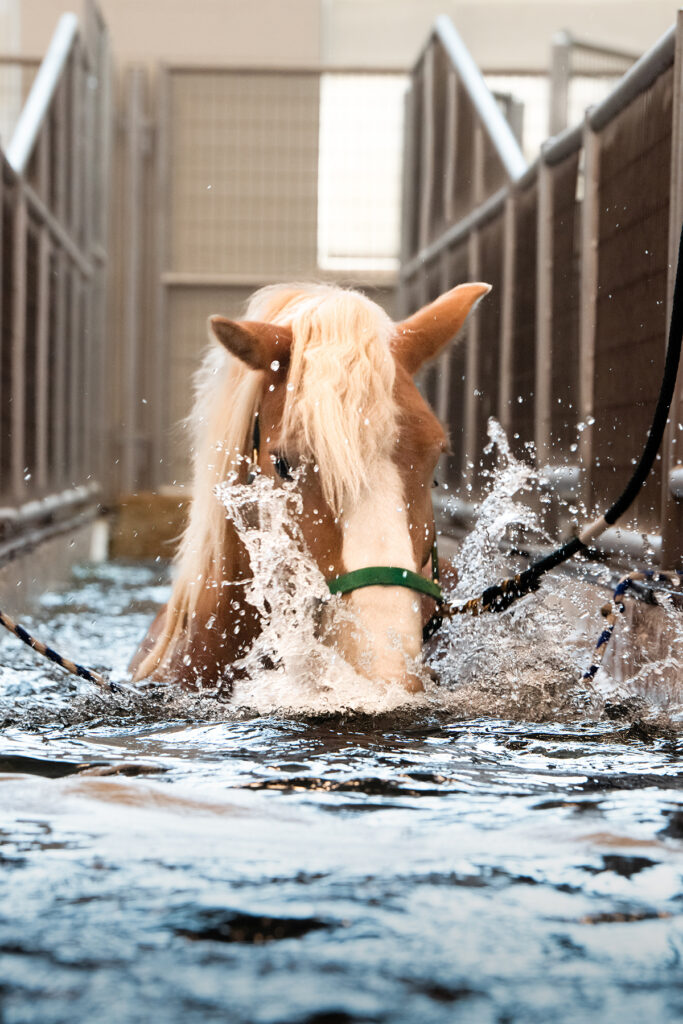 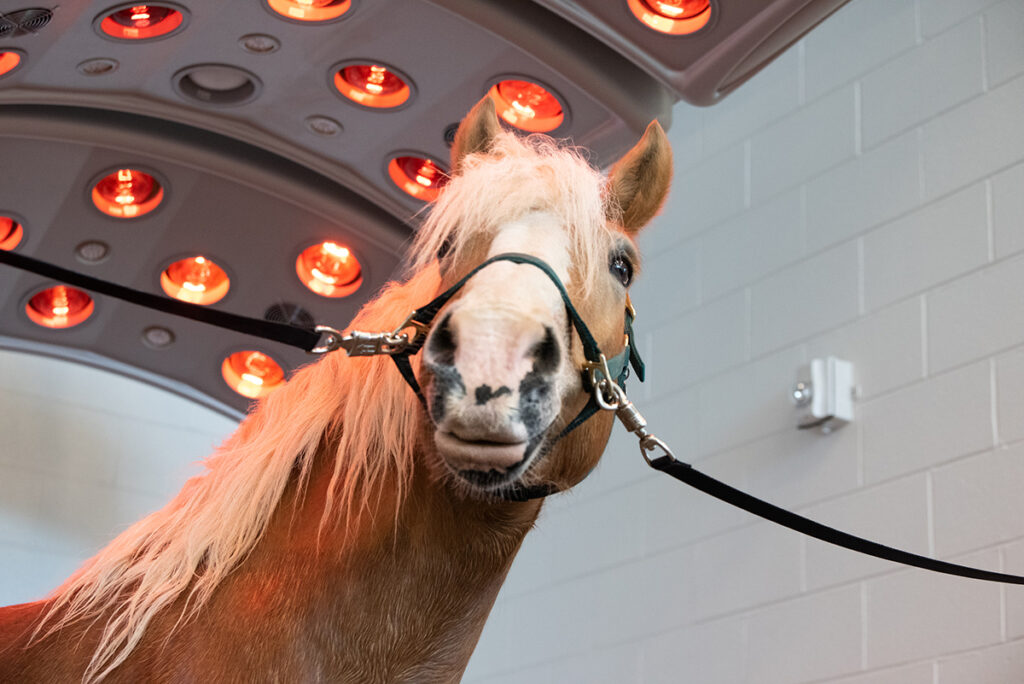 Lannie, a horse used for equine-assisted therapy at the Temple Grandin Equine Center, often demonstrates use of the in-ground underwater treadmill and likes to blow bubbles in the water. After water therapy, Lannie gets warm under the solarium.

Water therapy comes in two other forms at the clinic. An above-ground underwater treadmill, essentially a huge tank, allows clinicians to adjust the height of water used in a horse’s therapy, thus modulating resistance and buoyancy. Many human athletes are familiar with cold water immersion for recovery after intense training or competition. The cold salt-water spa at the equine clinic is similar: Horses stand in water infused with Epsom salts, set at about 32 degrees Fahrenheit; the cold soak, with massaging jets, reduces leg pain, swelling, or bruising. After water therapy, horses often stand under an apparatus called a solarium – a collection of heat lamps that lowers over the back to dry wet coats and reduce muscle tightness.

In a back corner of the clinic, a whole-body vibration plate is available to help horses build muscle strength, which aids injury prevention and recovery. As the name suggests, horses stand on a vibrating floor, and their muscles engage in response to the movement. The vibration plate migrated from human medicine: It was designed by NASA to help astronauts maintain bone density in space and since has been used for patients with conditions that result in bone deterioration. Vibration plates also are used to help people improve core stability and balance perception.

Just like a rehabilitation clinic for people, the clinic at CSU Spur provides a range of additional modalities to help equine athletes, including acupuncture, massage, lasers, therapeutic ultrasound, electrical stimulation, and kinesio taping. 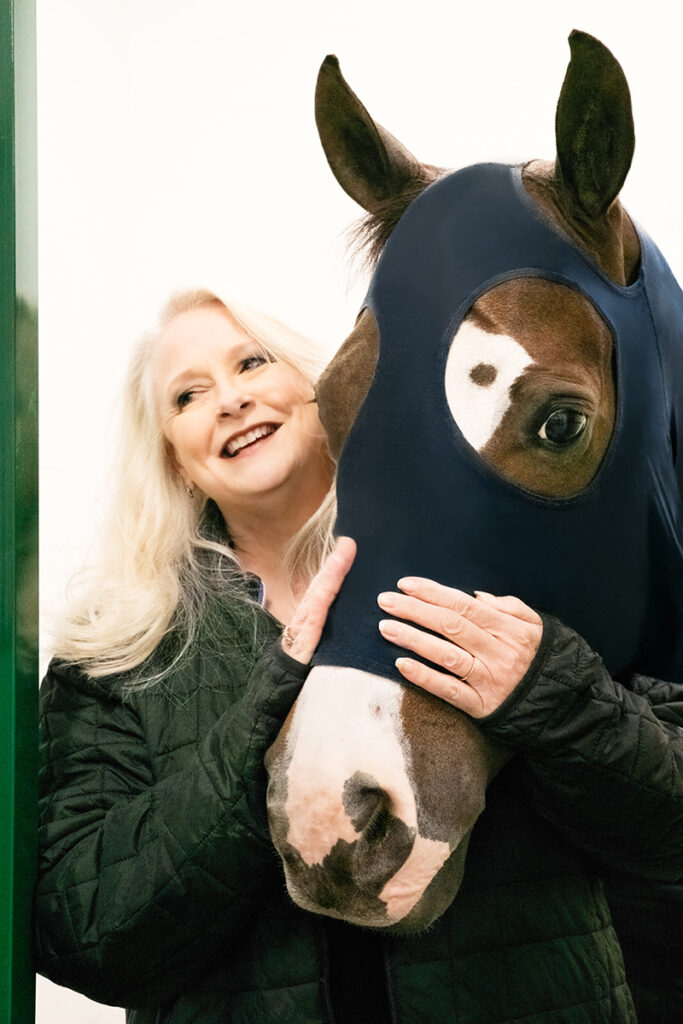 Terri Kenney hoped Odie’s veterinary care would restore his quality of life and enable him to return to competition. (He is wearing a hood that keeps his mane clean.)

Kenney is still amazed and appreciative that such veterinary care healed Odie’s injury. “I want people to know what incredible facilities CSU has. Odie has come back like a champ,” she said. “He was great before his injury, but everything the CSU team did – all the rebalancing of his body and making sure his legs were sound – has made him even better than he was before. He deserves the best, and the CSU team is the best.”

Photo at top: Dr. Melissa King, director of the new equine clinic at CSU Spur, leads Odie into a tank-style underwater treadmill in the Vida building. King oversaw Odie’s use of a similar treadmill as he healed from a serious leg injury two years ago.