The national total is a staggering $1.6 trillion. But most individual debt might be less than you think. 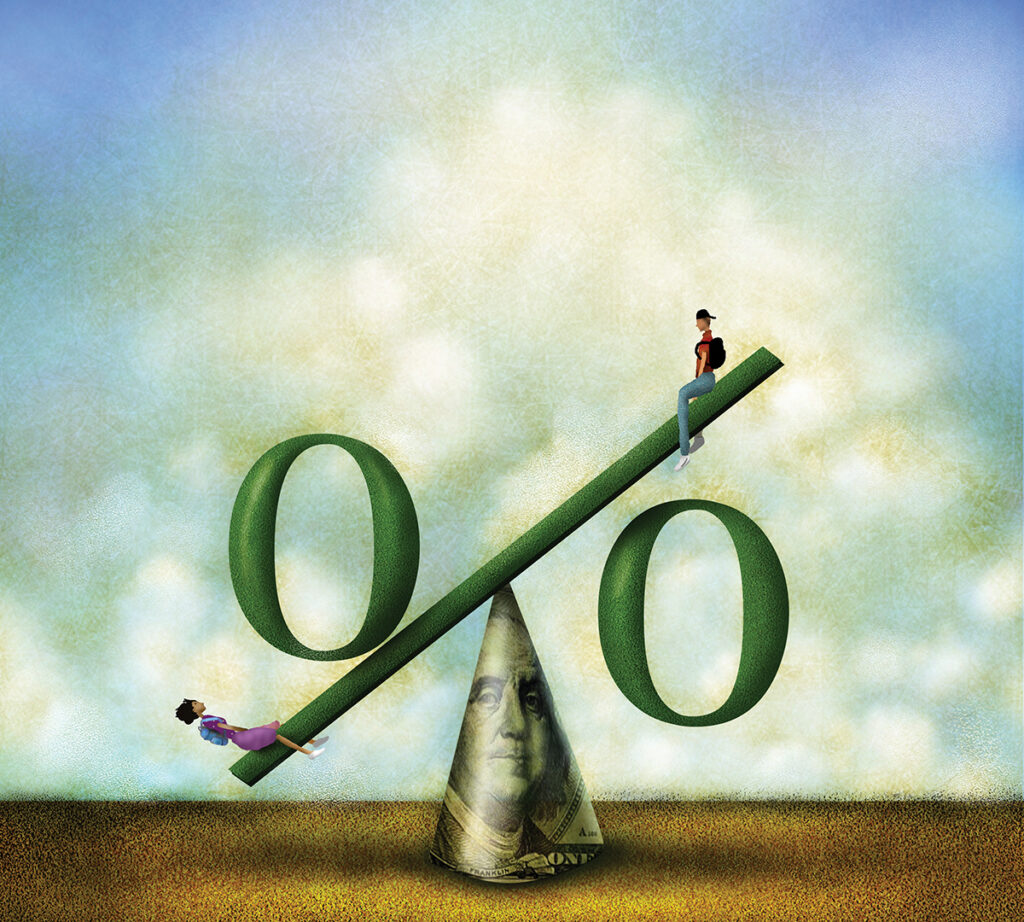 THE ISSUE OF STUDENT DEBT IS IN THE SPOTLIGHT AGAIN in the wake of President Biden’s decision to erase a significant amount of the education debt students and parents owe to the federal government. Formulating an informed opinion about this policy move requires a clear understanding of the explanations for student debt, the distribution of student debt within the United States, and the system in place through which borrowers repay their debts. Similar information is critical to sound policymaking at the federal and state levels and, to a significant extent, to the individual decisions students and their families are making every day about choosing and financing a college education.

Broad student debt forgiveness under the Biden plan applies only to federal loans taken out before June 30, 2022, and only to a maximum of $20,000 for individual borrowers. It is unlikely that the government will repeat this action any time soon; students are already taking out new loans and will continue to do so. (The debt forgiveness plan is being challenged in the court system, adding uncertainty to its implementation.)

In mid-2022, 45 million borrowers owed a total of $1.6 trillion in federal student loans. Biden’s debt cancellation plan would totally eliminate the debt of more than one-third of these borrowers and reduce the total amount of debt by about $600 billion.

For perspective, the amounts individual students are borrowing each year have been declining for more than a decade. Average total borrowing (federal and non- federal) per full-time equivalent undergraduate student peaked in 2010-2011 at $6,450 (in 2021 dollars) before falling for 11 consecutive years to $3,780 in 2021-2022. And the average debt accumulated by public four-year college students has leveled off in recent years.

These encouraging trends do not mean some student debt levels are not high. And there is no question that some borrowers struggle to repay their debts after they leave school. But the public discourse frequently exaggerates debt levels. 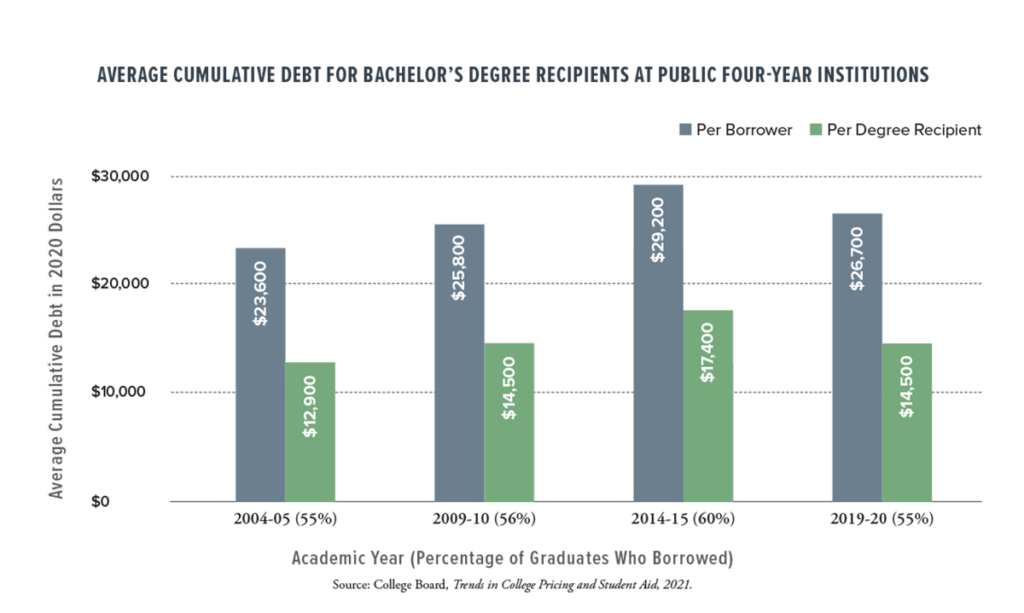 The federal government has a complicated and confusing system for loan repayment. Borrowers who do not make an active choice are placed in a standard repayment plan where they make equal payments over 10 years to retire their entire debt. But there are multiple additional options that can dramatically reduce monthly payments for many borrowers and, in some cases, lead to remaining balances being forgiven after 10, 20, or 25 years.

One-third of borrowers – owing almost half of the outstanding debt – are enrolled in income-driven repayment plans, which set their monthly payments at an affordable share of borrowers’ current incomes.

The details of the IDR plans vary, but borrowers generally make no payments if their incomes are below 150 percent of the federal poverty level, and they pay 10 percent of their incomes above that level. The federal government cancels remaining balances after 20 years for undergraduate borrowers and after 25 years for those with graduate debt. Borrowers who qualify for Public Service Loan Forgiveness see their debts wiped away after 10 years.

There are a lot of problems with the system. Aside from its complexity, borrowers must actively apply and then verify their incomes annually. Many who enroll fall out of the system because of the bureaucratic barriers. In some other countries, borrowers are automatically enrolled in a system of this sort and income data come through the tax system.

Under the recent Biden proposal, the IDR system would become significantly more generous. Already, many borrowers are not required to make any payments at all. The proposal would increase that number and cut payments in half for most other borrowers by raising the threshold for payments to 225 percent of the poverty level and reducing the share of income required for monthly payments to 5 percent. Estimates suggest that borrowers will repay an average of only 50 cents for each dollar borrowed.

It is easy to think of any policy that makes it easier for borrowers to manage their payments as a good one. But a loan program that distributes subsidies so broadly is not likely to be sustainable in the long run. Graduate students, who can borrow virtually unlimited amounts, already see a large share of the subsidies in the system, and that situation will be more extreme if monthly payments are lowered so much.

WHICH BORROWERS ARE MOST VULNERABLE?

Some groups of borrowers tend to borrow more than others pursuing similar types of education. Students at for-profit institutions borrow more than others and end up defaulting at very high rates. Leaving school without completing a credential is also a strong predictor of student loan default. Many students borrow relatively small amounts of money, but because they drop out, they do not get a significant financial benefit from their investments in education.

Black students borrow more than their white, Hispanic, and Asian peers. They come disproportionately from low-income, low-wealth families. Larger shares of Black students than of those from other demographic groups attend for-profit institutions. Black students are more likely to start college when they are older and to take longer to graduate. All these factors contribute to higher debt levels. Lower completion rates, labor market discrimination, and the absence of family resources all make repayment more difficult.

The Biden administration has actively forgiven debt for some groups of students, including those who are permanently disabled and those who attended institutions that defrauded them and/or closed. This type of debt forgiveness – as well as the extra $10,000 of debt Biden plans to cancel for borrowers who received Pell Grants as undergraduates because they came from low-income households – targets those most likely to face real financial problems. 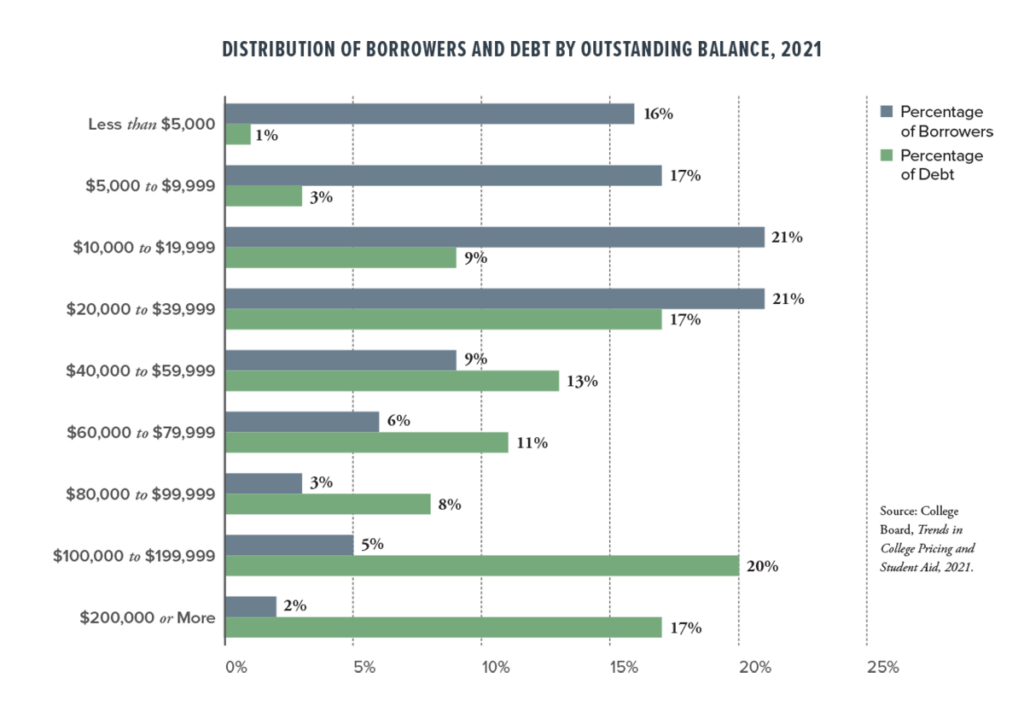 Biden’s proposed debt cancellation and, in particular, a significant increase in the generosity of the subsidies provided through the loan repayment system could contribute to higher levels of borrowing in the future. It is reasonable to ask whether lower tuition prices could counteract any such trend.

There is no doubt that when students must pay more for college, they are likely to rely more on borrowing. But the published tuition price is not a good representation of the prices students actually pay. Most undergraduate students receive some form of grant aid from the federal government, state government, their institutions, or employers or other sources. Net prices have not risen nearly as much as sticker prices over time. According to the College Board, between 2011-2012 and 2021-2022, when the average published tuition and fee price at public four-year colleges rose by 9 percent after adjusting for inflation (from $9,890 in 2021 dollars to $10,740), the net tuition and fees students at these institutions paid actually fell by 27 percent (from $3,630 to $2,640) because grant aid grew so much. Need-based grant aid is a particularly effective strategy for reducing the need to borrow because, unlike general reductions in tuition prices, it targets subsidies to the students with the most limited financial resources.

Notably, room and board prices grew faster than tuition and fees over the past decade. For public college students, non-tuition expenses are a larger part of the budget than tuition and fees, even before accounting for the grant aid that helps students pay tuition. Living expenses plus books and supplies account for about 80 percent of the budget at public two-year colleges and 60 percent at public four-year institutions. Even when their tuition is free, students borrow to cover these expenses. So “free college” would not eliminate the need for student debt.

WHERE DOES THIS LEAVE US?

Student debt is here to stay. But both better-designed public policies and support for better decision-making and student success could significantly mitigate the problems this debt causes. Moderate borrowing for college is not unreasonable. In addition to providing benefits to society as a whole, investing in college education brings significant benefits – both financial and otherwise – to most students. The average rate of return to the investment is high, even after significant increases in tuition prices. Most borrowers can reasonably repay their loans out of the extra income they earn because of their education and still live at a higher standard of living than their peers who did not continue their education after high school.

But in addition to keeping tuition prices in check, better personalized counseling for students making decisions about where and what to study, better funding of federal and state grant aid for students who cannot cover all their expenses out of pocket, and stronger support systems that help students to graduate on time can go far to reduce the financial pressures on students. A stronger income-driven repayment system that diminishes bureaucratic hurdles, makes monthly payments affordable but adequate to lead most borrowers to repay their debts, and conditions the total amount borrowers repay on a combination of post-college income and amount of debt accrued can protect students who take the risk of investing in themselves and their futures.

Sandy Baum, Ph.D., is an economist and a nonresident senior fellow in the Center on Education Data and Policy at the Urban Institute, a nonprofit research organization in Washington, D.C. She is a leading national expert on college affordability and author of the 2016 book Student Debt: Rhetoric and Realities of Higher Education Financing.