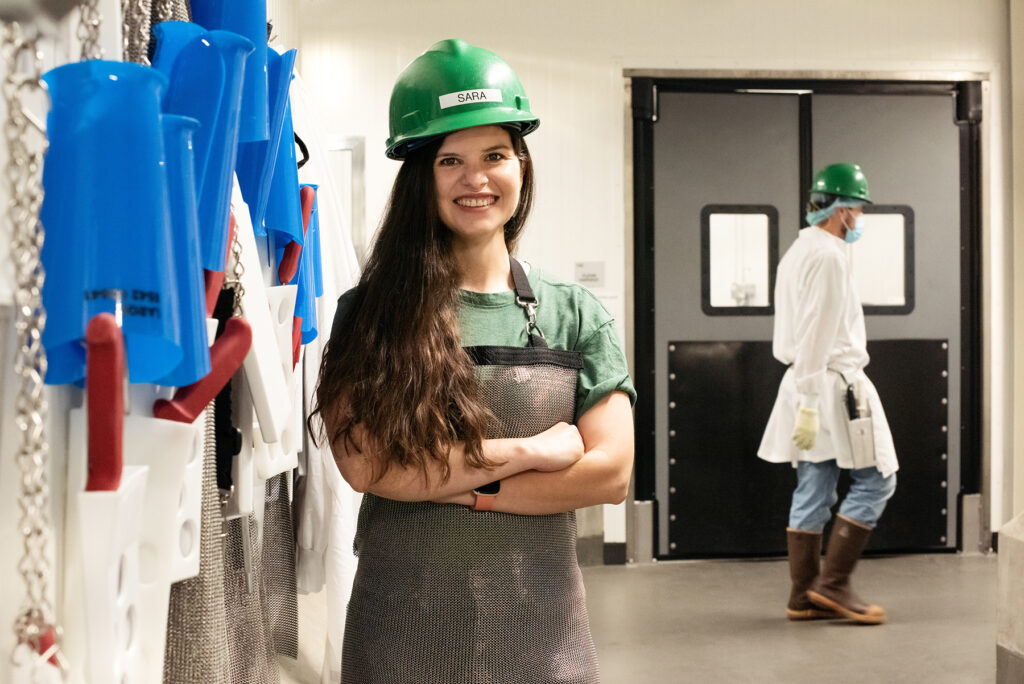 GROWING UP IN NORTHERN VENEZUELA, Sara Gonzalez was surrounded by food. Her family raised milk goats, sheep, and cattle. Her father, now retired, was a professor and engineer in livestock production. Her mother owned and ran a restaurant.

Yet, Gonzalez was steeped in an ethos of frugality with food – a mindset she links to life in a developing country, where the availability of healthy meals is rarely taken for granted. She learned as a little girl to serve only what she would eat.

Now, as a doctoral student at Colorado State University, Gonzalez is conducting research in meat safety and quality: She is examining whether a unique refrigeration technology can extend the shelf life of meat while maintaining its color, taste, and safety. Her study could guide use of the cold storage technology and its adoption in the meat industry, ultimately helping to stabilize meat availability and prices.

Gonzalez sees her research project as one small part of a broad effort to increase efficiencies and reduce waste in the food supply chain. The goal resonates with the young scientist from South America, who is keenly aware of the impacts of food shortages.

“We need to be more sustainable because we have limited resources in our world, along with a growing population and malnutrition and undernutrition in many countries,” Gonzalez said. “It’s important for us to be more efficient with food products, while continuing to ensure that food is safe.”

Gonzalez earned her bachelor’s degree in production engineering at Simón Bolívar University in Venezuela. Interested in graduate studies in food science, she connected through a family friend with the CSU Center for Meat Safety & Quality; it is housed in a new $20 million wing of the CSU Animal Sciences Building, called the JBS Global Food Innovation Center in Honor of Gary & Kay Smith.

Impressed by the program, Gonzalez enrolled. In 2020, she earned a master’s degree in animal science, with a focus on meat safety, having worked on research projects that assessed the efficacy of antimicrobial treatments for raw chicken and pork. When the pandemic hit, Gonzalez teamed up with faculty members to author COVID-19 health and safety guidelines for small meat-processing plants, which had quickly become important local sources for animal protein as national and international food supply chains were disrupted.

Now, her research is examining how a trademarked technology called Suspended Fresh may be used in the process of safely storing and selling beef, while also maintaining its appeal for consumers. The technology allows suppliers to store fresh meat for weeks or even months at temperatures just above freezing, more than doubling standard refrigeration time and providing a backup when meat supplies are tight.

That’s significant in part because U.S. consumers are finicky about beef: They want steak and other cuts only if they are fresh and bright red in the grocery case. Freezing meat – the easiest way to store it for long periods, thus helping to ensure dependable supplies and prices – results in changes in texture and juiciness, as well as discoloration that is unappealing to most consumers. So suppliers and grocers seek refrigeration techniques that keep meat safe while maintaining its appeal.

To gauge safety, Gonzalez’s study is examining the presence of microbes on ribeye and strip steaks stored for different periods of time at very cold temperatures – important because microorganisms can lead to spoilage and safety concerns. Then, using a sensory lab in the food innovation center, her project also will assess consumer reactions to steaks safely stored for different lengths of time.

Many consumers in the United States can afford to be picky, Gonzalez noted. She attributed the tendency to a core economic factor: In 2020, U.S. consumers spent an average of 8.6 percent of their disposable personal income on food, according to the U.S. Department of Agriculture. There are wide disparities across the nation, with low-income households spending much higher percentages on food; during the pandemic, these disparities have resulted in difficult food shortages for many families. Yet, overall, U.S. consumers for years have spent the lowest share of their income on food when compared to consumers in every other country in the world. The figure has hovered around 10 percent since 2000, according to USDA reports.

Gonzalez said she hopes efficiencies in the food system will assist people who struggle with availability and cost.

“When you grow up in a developing country, you see a lot of things differently,” she said. “I feel like I have a broad view, and that can help solve problems.”

Photo at top: Sara Gonzalez is a graduate student who conducts research with the CSU Center for Meat Safety & Quality. Earlier in the pandemic, she helped write COVID-19 health and safety protocols for small meatpacking plants. Photo: Mary Neiberg